Yesterday instead of the usual bills and junk mail dropping through the letter box I got  a parcel. An unexpected parcel from north of the border.

The lovely Padmae (aka Emma) from Aberdeen had sent me some tea cake – for the details check out her blog here. She says its Nigalla’s Fruit Tea Loaf – I don’t care whose it is – its lovely and so unexpected.

Ahhhhhh ! Economy Gastronomy has been ditched in favour of Athletics

I have been working my way through a large selection of plums recently thanks to some heavy duty raiding of hedge rows etc. These cooking sessions are waiting to be posted but are currently suffering from “silly cow disease” which in this instance manifests itself in forgetting to put the card back into my digital camera which means I can’t get the pics of the camera until I’ve found the camera lead – and I do like to include the occasional picture on Appetite for Cake.

In addition to copious amounts of plums we have had a busy weekend entertaining as we were visited by a couple of lovely Australians, who weren’t really Australians but have lived out there since 1976 (Husband’s cousin and her husband) – they can come again anytime, especially as they washed up before they left this morning.

Had been planning on emptying the leftovers in the fridge into a pie dish and covering it with pastry, but Husband had already got dinner under control (pasta and odds and ends of cheese) however there was still time to do a curry for lunch for the rest of the week.

This curry again is based on the things in the fridge that needed to be used up, plus a few store cupboard items.

Prior to the phone call on friday from Husband’s cousin asking if they could drop in over the weekend I had rescued some duck legs from the bottom of the freezer and was all geared up to stick them in the slow cooker. As they had now been defrosted several days cooking them was becoming rather a priority. I also had some elderly garlic, a sorry for itself thumb of ginger, part of a red chilli and an onion. In the cupboard there was a tin of coconut milk which had been there for rather some time…in fact all the ingredients for Peter Gordon’s Duck Curry with Pickled Plums -which is currently slowly cooking in the top oven.

The remaining plums unfortunately were a bit too ripe to be pickled so I have improvised with a plum compot (based on seasonal compot from Leon cookbook) but with the seasonings from the pickled plums (star anise, cinnamon stick and lemon zest instead of lemon grass). The remaining coconut milk I’ve mixed with some frozen rice.

I will report back tomorrow, as its going to be my lunch, Husband does not eat curry, duck and possibly not coconut milk…it is smelling “interesting”

Incidentally the recipe is meant for 6, I divided mine by 3….

On Wednesday the neighbours surveyors report arrived, and quite frankly it was the same “being hit in the stomach” experience I’d had when I received the solicitors letter – how can anyone get things so wrong ?

I went round to see a neighbour to ask her if she knew any other neighbours who might have been here long enough to quote authoritatively on the boundaries and she said “glad you came round, I have a parcel for you” !

It was my copy of Economy Gastronomy that the wonderful Fairy Goth Mother had ordered for me… boy did that cheer me up !

Have only glanced at it so far as I’ve been rather shaken over the surveyors report and had to take a day off work on Thursday as I didn’t sleep on Wednesday night…ended up watching Tampopo at 3am in the morning and drinking tea.

On the way home the other night I decided to investigate some glimpses of yellow and red in the hedgerow. I pulled up in a little layby and checked out what looked like fruit to discover that I hit a goldmine of “cherry plums”. Cherry plums are small plum tasting fruit that apparently can be used in much the same way as cultivated plums and being slightly sharper are ideal for jam making.

I have been pretty low recently, so low that a number of friends expressed stated that they had been worried about me. Things have been getting me down, but it is thanks to these friends (and family) that I am not sinking. I owe a lot to my friends and weirdly it’s been my “new” friends who have been there for me when I’ve needed them.

The weekend was full of lovely hi points. It was Teenager’s birthday and we had made a cake. I say “we” as Spider was helping with the icing, primarily by eating the cola bottles bought for decoration 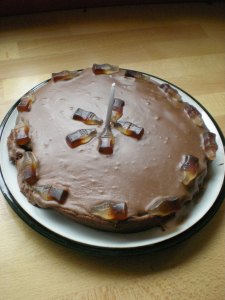 . The cake was Nigella’s Coca Cola Cake (How to be  Domestic Goddess) – which was very very nice and incredibly easy to make…it is however quite a flat low cake, and it stuck to the foil which lines the tin to stop the mixture seeping out and all over the oven…so I iced it on a plate and used the icing to hide the fact that the cake was in several pieces!

We were visited by the Fairy Gothmother, who is always happy to talk cake and has now a page on Facebook called “Cake District” she was bearing lovely gifts, late birthday presents for me and presents for her goth son…she also waved her fairy gothmother’s wand in the direction of Amazon, sprinkled fairy dust and lo and behold they delivered a copy of Economy Gastronomy to our address…or at least they will do as soon as it gets released!

On Sunday we invaded Flapjack Queen’s house to ask them to come for a walk and ended up spending most of the day there – when we did finally get out we discovered a hedge of “wild” plums in the allotments out back and introduced the children to the delights of pick your own fruit grinning conspiratorially at each other as the sticky juices ran down our chins and on our fingers.

Back at FQ’s palace we made plum crumble (plum and pecan (HtbaDG), a big one for the family and a small one for a lady up the road who no doubt picked the plums in the 1930’s when she was a teenager…I love the continuation of  history you get in a village. FQ made a banana and blueberry muffin cake and sent me away with half of it in return for my plum crumble.

So thank you friends, and in particular Fairy Gothmother, Flapjack Queen and Wingnut (who introduced me to geocaching which gets me out of the house) – all of whom it turns out are graduates of Durham university…

A Case for the Ordinary - Asylum records in an English County

Adventures of a plus size renegade seamstress

running slow to get far

stories, pictures and cooking tales from an english woman living in rome.

A blog to help educate, inspire and motivate people to achieve their own VICTORY!!

& bakes & creates & some other stuff too