Which aside from lots of lovely food, has a cute octopus on the front, what’s not to like… especially if cute octopus also means recipes for cooking cute octopus…(yes, in case you are wondering I have eaten both Bambi and Thumper… I am heartless)

I did my usual read through “ohhh that looks nice, must make that etc” and then, comprehensibly failed to make anything… lots of good intentions here, very little action

And then depending on what it was I’d either make a scaled down version for my lunch or make it for the family… because as usual what has stopped me cooking has been the thought “oh, they probably won’t eat that” 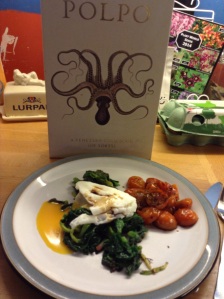 It’s randomness was achieved by my favourite approach to cooking which is “open the fridge – now, what needs using”

I’m allowing myself a free pass for next week, on asking O mighty Tim to suggest a number he said 12… which turned out to be part of the introduction. On changing it to 112 it turned out to be a recipe involving cuttlefish

Next weeks recipe may be lacking in randomness except that it will probably be something involving Asparagus… watch this space.

The Spinach ? Oh that was ok, went well with the egg, but both were improved by splashing some balsamic over them… I was aiming for the tomatoes but missed and got the rest of the dish…serendipity

A Case for the Ordinary - Asylum records in an English County

Adventures of a plus size renegade seamstress

running slow to get far

stories, pictures and cooking tales from an english woman living in rome.

A blog to help educate, inspire and motivate people to achieve their own VICTORY!!

& bakes & creates & some other stuff too